Understanding and Building a Defense Against Malicious Wounding Charges in Virginia 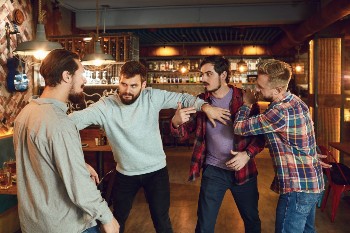 Malicious wounding charges often stem from fights that get too heated and head into violent territory. While the charges can also apply to attempted murder, the majority of cases are situations such as bar fights that escalated too quickly. If you have been charged with malicious wounding, it’s essential you understand what Virginia law is on the matter and work with a quality attorney to build a strong defense.

The precise definition of “unreasonable wounding” under Virginia’s code of law states that a person commits this offense if they unlawfully:

This is when malicious wounding occurs without violent intent. One example of this could be viewed as self-defense during a physical altercation. An individual who is convicted of unlawful wounding will face Class 6 felony charges. They can expect a prison sentence between one and five years as well as criminal fines up to $2,500.

Aggravated malicious wounding is when:

Aggravated malicious wounding charges are more serious and are considered to be Class 2 felony charges. Those convicted may receive a sentence to life in prison, as well as criminal fines of up to $100,000.

Finally, the state of Virginia takes malicious wounding against a police officer, firefighter, or another emergency worker quite seriously. There is a minimum two-year prison sentence if convicted of this variation. However, there is one caveat—it must be proven that the defendant was aware of the victim’s job at the time of the assault.

If you are hoping to build a defense after being accused of malicious wounding, there are a few routes that can be taken depending upon the situation that occurred.

The most common type of defense strategy is proof that the defendant was acting in self-defense. If you can argue that the individual was wounded in order to protect the defendant, your charge could be reduced from Class 3 to Class 6, which means your fines and prison times can be lessened.

It is a rare tactic used, but a mutual combat defense is when an assertion is made that the wounded party consented to be touched. An example of this would be a boxing match or other contact sport where an injury occurs.

Sometimes the defense can be mitigated if there are other factors that can be brought into the case. These include:

These could all impact the case and tilt things in favor of the defendant.

If you've recently found yourself in need of an experienced criminal defense attorney in Virginia you should speak with us as soon as possible. Please contact us online or call our Fairfax, Virginia law office at 703.277.2811 to schedule your free consultation.